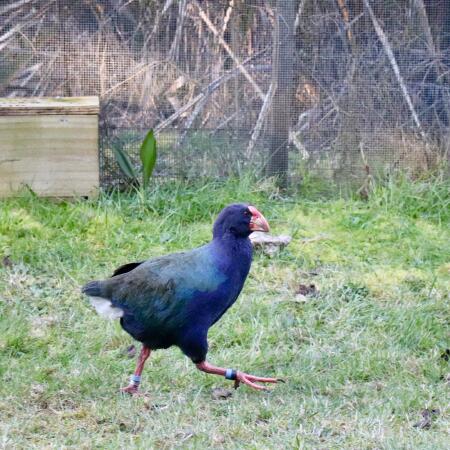 Sanctuary Mountain’s five takahē juveniles were safely captured, checked and sent to Burwood Bush rearing facility in mid-August in a very successful but time pressured capture event –all chicks arrived safe and well. Most of these chicks will be released to the Murchison Mountains once they learn the skills needed for wild living – including learning to forage on tussock.

In early September, with barely a chance of goodbye, male takahē, Ngutuwhero (Tautari Wetland), and Brodie (Cooper’s enclosure), were unceremoniously captured and divorced of their long-term partners Nancy and Puiaki, respectively. The purpose of the divorce was to re-match our females with males of better genetic value, as the breeding at Maungatautari has been so successful in recent years. There was a brief but heartfelt karakia and farewell at Tari Road before they left, with a few misty eyes about. However, on the plus side both these fellas were destined for release on Motutapu Island, with more freedom and sea than they have ever known, so not such a bad exchange!

As we dropped these two off at the boat, we picked up one bird named “Hemi” who had been residing on an Island in the Hauraki gulf and we transported several other birds to Auckland Airport, where we picked up our second male “Pirie” who had been flown up from the deep South. The new males were blessed by mana whenua Harry before being released to their new homes. Hemi (hatched 2011) was matched with Nancy in the Tautari Wetland and at a whopping 3.2kg is quite a strapping lad. He arrived from Motutapu Island where he has raised four juveniles since 2012. Pirie (hatched 2018) is just a young fella and was matched with Puiaki in Coopers. He has been a yearling helper at Burwood Bush, but has not yet raised his own brood. The new pairs were observed for nearly an hour after release to ensure they were getting along, and the two females were last seen that day following the new boys around.

Within days, the Wetland pair were seen to mate in full view of our educator Sue Reid much to her surprise (talk about getting over heartbreak). Both females have attempted to nest already but unfortunately the first nest attempt for Puiaki and Pirie failed – not least because he was off exploring his new home and did not take turns minding the eggs. (takahē volunteer Warren is going to have a few words with him to buck up his ideas!). Nancy and Hemi have been working well together sitting on at least one egg and hatch date is about now, so we have our fingers and toes crossed for a positive outcome. Whilst we are hopeful for some successful breeding this year, there is no pressure on our new couples as their health and wellbeing comes first, and we are sure that in years to come these “gold-star” matches will produce some high-quality chicks.