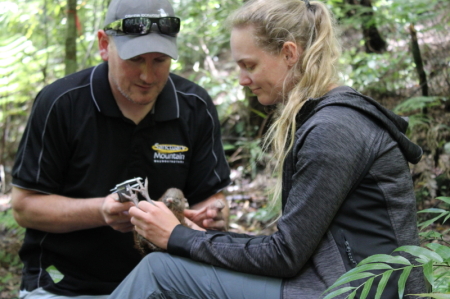 The five year project to release 500 new founding kiwi to the already bustling Maungatautari kiwi population has hit top gear this season. At the time of writing this we have released 54 kiwi since 16th of October 2020 compared to 29 we had released over same time period in 2019. This sounds like a lovely problem but the pressure to find appropriate release sites where there is plenty of moisture is always my highest priority. These little kiwi only a have a beak about 45- 50 millimetres whereas an adult female kiwi can have a beak 150 millimetres in in length. The adults have far greater access to the deeper invertebrates and the chicks are restricted to those more shallow depths. Invertebrates are generally found where it’s not too dry and hot, hence why I try to find nice dark and damp release sites.

This summer’s weather so far, as many of you will have noticed has been quite damp. This may not be conducive to having fun camping holidays and getting a golden tan, but for me this is fantastic. Because of the frequent rains the forest floor retains a lot of that moisture so that kiwi can thrive and will provide these four week old kiwi with an abundance of food that helps them grow into plump and healthy individuals.

I have now begun to monitor a select few of these kiwi chicks to monitor their growth and survival rates. All of the data gathered will eventually aid us in working out how productive the maunga is for breeding kiwi. I have released the kiwi chicks into the southern enclosure so that I can use them as a training tool for new and current volunteers, on how to track and report on the kiwis whereabouts. Eventually they will be released onto the main mountain and that’s when the hard work will begin. Already with five on transmitter I can see different behaviours between them in a short time. Some choose to just hang in the same relative area where they were released, and some over a couple of nights have walked 500 metres as the crow flies, and up some steep terrain. That is impressive for a little kiwi that only weighs about 400 grams.

I also found the resident adult female ‘Haerenga’ well out of her territory potentially giving the new arrivals a hard time (speculative) and this could be why a couple of them are so far from their release sites. She has since returned to her usual haunt so it will be interesting to see if the chicks settle down now. If this is accurate, isn’t it amazing how she knew about the new kiwi that were outside of her territory, and how sensitive their sense of smell is?

Speaking of 'Haerenga', she and her partner 'Wilson' had eggs this year. Wilson was doing a great job incubating them and had a routine of getting out of bed at about 11pm and staying up for 280 minutes. His activity indicated he had left the burrow shortly after New Year’s Day, but in fact he was still there, as his signal was still strong and coming from his burrow. My trail camera footage let me know I had at least one chick in the nest too. The decision was made to do the 'chick snaffle'. As I approached the burrow and reached into the entrance I could hear the cute little “kiwi bark” sound young kiwi sometimes make. I felt around really carefully as there was a slim chance there was an unhatched egg still in there, so I had to go slow and steady. After finding there was no egg, my next move was to find the chick or chicks. Wilson wasn’t having a bar of it so he blocked me from grabbing the chick. So out Wilson came so I could access the chicks. Fortunately, despite my current adrenalin filled state there was only one chick. I have been waiting for this moment for three years and attaching a transmitter with shaky fingers isn’t ideal! I will not know the sex of the chick for a while yet but I have named him or her 'Witi katoa'. To those who can read te reo Māori you might be thinking I’m a little weird. Wholegrain is the longest word you can make from the parent’s names put together. Translated into te reo, I got witi katoa.

This chick is destined to move to Tongariro National Park once it is big and strong enough to defend itself against predators like ferrets or stoats. His bloodlines whakapapa back to Tongariro and is part of a long relationship we have with the area. I will post updates on his growth and development as he grows and eventually departs the maunga.

So as you can read the kiwi are keeping me pretty busy and I am \keen to recruit more active volunteers to help in keeping tabs on this amazing project. If you want to give it a go, please get in contact with me at kiwi@maungatrust.org.