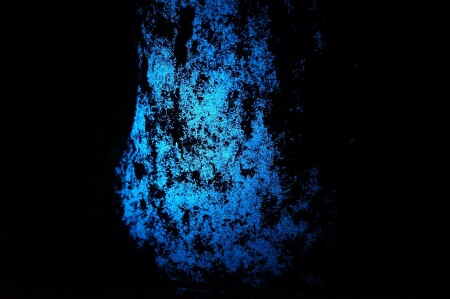 In July I was lucky enough to be given permission to explore Sanctuary Mountain Maungatautari to look at invertebrates in the evenings and take photos.  Firstly, a big thank you to all the staff, guides and volunteers I met who facilitated this.  It was a real privilege and pleasure.  Naturally I gifted my photos as a thank you and I hope they are useful.

Unfortunately, the weather was terrible; very wet, cold and windy with single figure temperatures, which meant fewer invertebrates were out and about and therefore fewer photo opportunities.  On the first rainy night, I spent an hour sheltering in one of the composting toilets during a heavy downpour to protect my camera gear!

During my nocturnal wanderings, I saw lots of pill and flat millipedes, many species of cave weta, tree weta, orbweb and sheetweb spiders, snails, harvestmen, crane flies of all sizes and colours, flatworms, slaters, leaf vein slugs, a few moths, moreporks, native wasps, beetles and large centipedes.  Of interest, I saw lots of koura (over 30 I counted of all sizes) and two giant kokopu.  The search for peripatus and giant collembola (springtails) proved fruitless; they are there but conditions to see them were not favourable.

In Te Tūī a Tāne Southern Enclosure, I was lucky enough to see a North Island brown kiwi on the track about two metres away.  I was also privy on another night to a duet between a male and female kiwi and another male butting in with his call.

What was purely magical was seeing the forest under ultra-violet (UV) light at night.  In Whakatane Kiwi Trust’s Night Walks, we have trialled the use of UV torches to show the forest and night life in a different light.  It brings a fun almost ‘avatar’ feel to the forest as many invertebrates emit a blue-green glow via cuticular fluorescence.  To date, we have observed harvestman, glowworms, millipedes, centipedes, weta, flatworms, peripatus and caterpillars.  Plants also glow especially liverworts and lichens - some lichens glow bright gold.  Using UV light is also a great way of fungi spotting; with bracket fungi, you see blues and pinks glow.  Maungatautari is no different and is truly spectacular.

I also enjoyed the day wanderings along the tracks seeing the awesome forest and birds.  I saw lots of tīeke, miromiro, kereru, tui and I was lucky enough to catch a brief glimpse of a kokako dropping from one branch to another.  Many fungi were out including beautiful coral fungus.  Whilst looking for lizards sunning themselves on the rocky outcrop, I saw a forest ringlet butterfly at rest and flying - a highlight for me but I was too slow to get a picture.

Thank you very much for the opportunity to explore and I encourage everyone to go out with the great guides to experience Sanctuary Mountain Maungatautari at night.