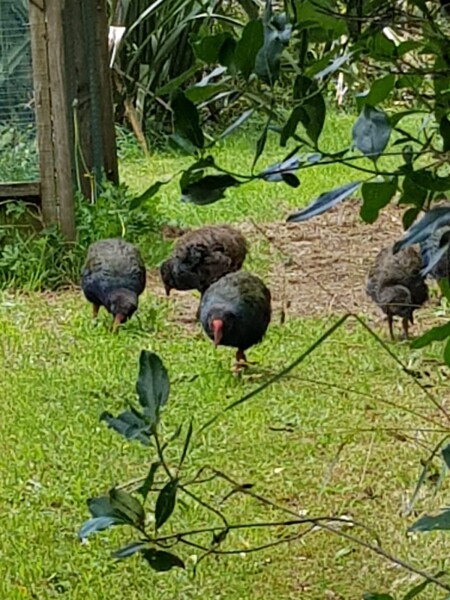 After moving to Cambridge from Warkworth in 2015, I was asked by a friend if I was interested in doing volunteer work at Maungatautari with a great group of people known as the Gofa team. My wife, Judi, and I had done a lot of recreational bird watching in the U.S., Central America, and the Caribbean; and so the idea of volunteering in a sanctuary for New Zealand endangered birds was appealing.

Initially, the work involved jobs such as fence-line pest monitoring, track clearing, and the much-loved job of skinning and chopping up rabbits for mustelid bait. Two of the more substantial projects the team did were building the Tari Road nursery from scratch and Cooper’s takahē enclosure. The work was hard, but the combined effort and camaraderie of the team were special. A few years ago I was given the opportunity to take part in setting up and maintaining feeders for hihi along the quad track and this, along with feeding the takahē at Cooper’s, is my main work at the maunga now.

Maungatautari is a special place for me. There is a tītoki from the nursery that is planted in the access walkway to the southern enclosure in memory of a friend. There is the moment early one Easter morning when I saw three kōkako flying from the southern enclosure. There were the chances to collect kiwi from Rotorua or Wairakei and help with the release. Every time the takahē brings their chick to the feeder, or the hihi is telling you to hurry and get the sugar water out, you know you are making a difference. At the titipounamu release, my little female was fluttering in the box all the way up to the release site, but when the box was opened, she waited until we looked each other in the eye, and then exploded out and up into the sky. But most of all, it is those moments when you stop what you are doing, breathe in the scent of the bush, and allow the peace and magic of this sacred place to flood your soul.