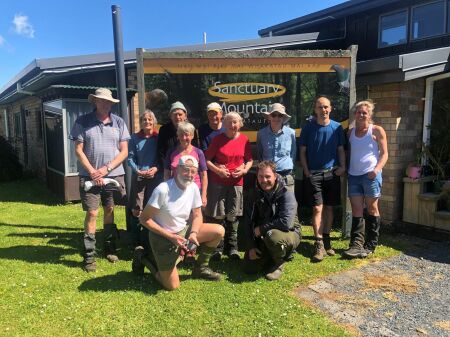 When Jessica Meade approached me regarding our club spending a day at Sanctuary Mountain helping staff with track clearing, a notice to club members produced an enthusiastic response. This resulted in eight of us arriving at Maungatautari early on 31st October 2019, to be warmly greeted by a team of volunteer staff waiting for us. Like most tramping clubs, many of us are experienced in track clearing. Our club has responsibility for the maintenance of some local DoC tracks as part of the Kaimai Ridgeway Trust.

Following a health and safety briefing and an induction talk, we were divided into two groups; one to clear an upper monitoring line, working down to meet the second group who worked their way up a lower monitoring line. The task was straightforward, as it was just a case of locating existing markers and trimming back the vegetation to enable easy passage. This meant staff and volunteers wouldn’t need to spend time finding their way and could concentrate on collecting and replacing the cards in the monitoring tunnels.

Having the opportunity to walk through parts of the Maunga visitors don’t normally see was a unique experience, and one we would be keen to repeat. One thing that I especially remember was hearing saddlebacks kicking up a noisy fuss as we passed by under the canopy.
The second group did not have such an easy time. One participant reported as follows: “Ian Barnes, bless his heart, reckoned Tom and I were the fittest of our group and so off we went with two volunteer staff driving quad bikes further up the mountain. Our task was to clear an upper monitoring line, working down to meet the other group of six led by another staff member. Their job was to work their way along a lower monitoring line across two ridges to a small creek. They were transported in a couple of utes to a gate in the predator proof fence near the top of the Southern enclosure. Tools were provided but most of us chose to use our own. Unfortunately, our leaders were unsure where the monitoring line began, and so after a few minutes of climbing up the sometimes steep old track, a radio call established we were on the wrong part of the track. Back down to the quad bikes and a lower section of the track, to find after a short uphill slog that we’d been on the right track after all. We just hadn’t gone far enough! Up again we traipsed (not so merry by this time) until the correct turnoff point appeared – a large, orange DoC triangle bearing the name of the line. The line was fairly easy to follow, marked by red triangles, but was overgrown.”

We all enjoyed our time on the Maunga and look forward to another chance to work with the volunteer staff in 2020. We’ll be back!