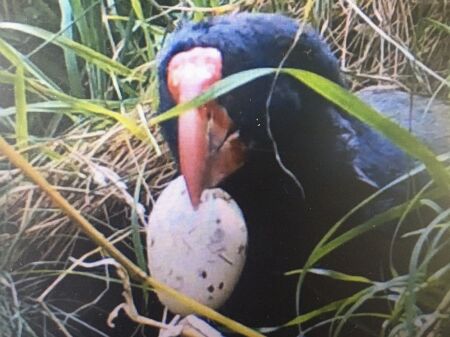 Unfortunately, this year the takahē have not had any success with their nests. The Cooper’s pair successfully hatched one egg, with a chick heard on camera, but days later a rain and flooding event is suspected to have caused either drowning or exposure of the chick as it was never seen again. The pair has not attempted a second nest to date.

In the wetland enclosure, two nests have been attempted with overdue hatching both times and eggs found to be rotten when checked, with the second nest naturally abandoned by the parents. It is strange indeed not to have the wee takahē chicks around this summer, but there is a small chance they may yet attempt to breed and if not, there is always next year. Interestingly, caught on camera were the adults ingesting the old egg that had not hatched - now that is some efficient recycling of calcium.
​
Photo of takahē with unhatched egg.