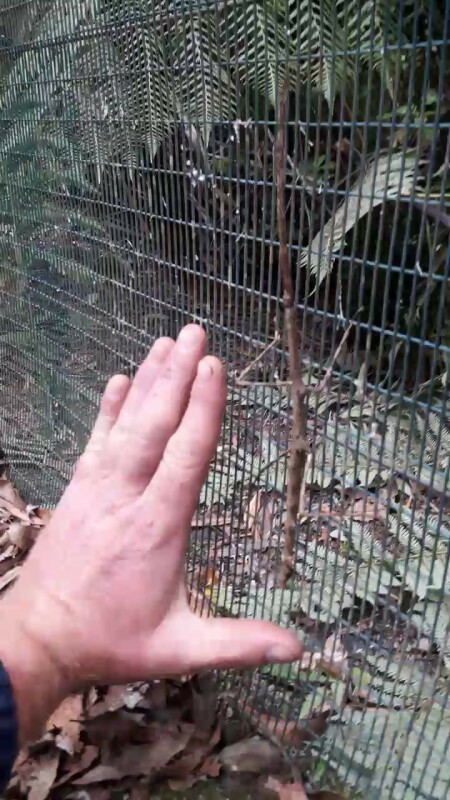 Insects rarely receive the same amount of attention as our more charismatic species such as kiwi or hihi. However, the rare and endangered species of New Zealand include many interesting insects. As part of our 10-year restoration plan, the insects of Maungatautari do receive some attention finally. In particular, the following five species have been earmarked as “missing” from the maunga and have potential for translocation. However, prior to that we need to survey to ensure they are not, in fact, already present and rebounding with the restoration of the forest.  The five species are:

Dr Chrissie Painting from The University of Waikato has been conducting insect research at Maungatautari with several students, including a summer project into the breeding and genetics of giraffe weevils. Talk about knowing where to look…there were giraffe weevils present on a fallen log about three metres off the Rata Track in the southern enclosure. The research team managed to get some great data and samples and will let us know the results in due course.

Operations team leader James Matthews recently shared a video of a rather large stick insect on the fence-line, which we have now confirmed is an Argosarchus horridus (giant stick insect). That is two ticks off our list of five in the past few months. It is fantastic to have some strategic goals and the restoration plan indeed helps guide us into the priorities for this amazing restoration project. In the coming year we have Dr Chrissie and co. set to join us again for more insect research and look forward to sharing their findings with you.

Covid-19 restrictions have meant that species work that was to be undertaken in April and May has had to either be postponed or cancelled. This included some fantastic species work such as the rifleman translocation and tuatara survey – very disappointing but understandable in these turbulent times. However, some work has been salvaged and we will update you next month on some of that.

When working with native species, pasture management isn’t what first comes to mind. However, that is exactly what is currently being worked on to improve the Tautari Wetland grazing for one of our takahē families. If you take a tour, you will notice some brown areas due to some spray work that was conducted to kill off invasive gypsy wort, bracken and problem grasses including couch and browntop. These unwanted species have slowly taking over the good pasture grasses and into the wetland itself. The nursey team has a heap of native tussocks and grasses ready to go in…but Covid-19 has interfered with that too. Along with native plantings we aim to keep a good proportion of takahē -appropriate grazing grasses on the banks. With the help of PGG Wrightsons and some various trials we are slowly figuring out the best way to improve this area and a longer-term strategy which will include targeted spray work, plantings, grass seed sowing and mowing. This goes hand-in-hand with the Tautari Wetland Restoration Plan that was updated in 2016 and has many key actions including ongoing spraying, hand pulling of weeds and planting, maintenance of the tuatarium and more.