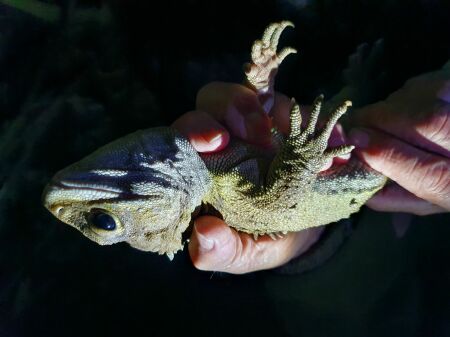 Fifty tuatara were released to Maungatautari in two locations in 2012, with 20 released to the Tuatarium in the Tautari Wetland. Initially our permit required tuatara be surveyed annually, after which the survey effort can be reduced to every five years (due this year). The survey aims to check the health of known tuatara and log the positions, weights and sizes of any new juvenile tuatara that have been recruited into the population.

In early December we conducted a tuatara survey with some keen species volunteers including reptile experts. With good weather, we were able to conduct two nights of survey in the tuatarium with a total of approx. six hours spent in survey effort with 7-8 volunteers each night. We gathered at dusk to go over health and safety and quietly made our way to the tuatarium. We split into two teams. Two people were “catchers” on each team with two members doing the processing. This including scanning for a microchip, weighing, looking over the tuatara for signs of injuries, parasites and general health, then measuring their length. Each tuatara was temporarily marked with non-toxic white pen, which you may still see on them if you visit the tuatarium!

A total of 23 tuatara were caught with one additional big fella (#24) evading capture despite our efforts. Fifteen tuatara had microchips showing we caught 75% of the original founders and there were eight females, 14 males and two unknown juveniles. There were nine juveniles in total, showing some good survival and recruitment. All were in good health which was great to see.

The survey was a brilliant success thanks to the keen help of all the volunteers. We are very lucky to have such knowledgeable people willing to donate their time to our project – too many to name but a huge thank you to all involved, and we are very much looking forward to the second tuatara survey in the new year.