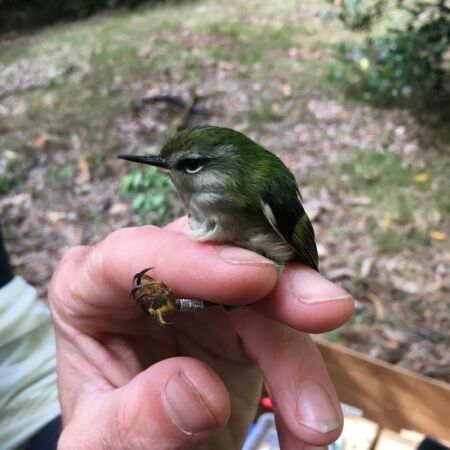 The newest species to join our menagerie of forest species at Maungatautari is the mighty but tiny North Island titipounamu (rifleman) Acanthisitta chloris.  Eighty of these insectivorous birds were released in May and June of 2021.  Since their release staff, volunteers and visitors have reported seeing and hearing them throughout the Te Tui a Tane Southern Enclosure and OTM track near where they were released and even further afield.

The release was only the fifth translocation of titipounamu and one of the most successful transfers, with 100% survival to the time of release.  Whilst this is a fantastic result, the translocation is not considered a true success until we know that enough birds have survived and reproduced.  The translocation process is extremely stressful for birds and especially for small birds with such high metabolic rates.  The stress occurs during initial capture and processing, but also the transport, release, and having to establish new territories in their new home.

The first translocation of (South Island) titipounamu to Ulva Island in 2003 resulted in a 52% survival rate to release, but with an excellent survival post release (Leech et al., 2007).  The authors gave several recommendations for subsequent transfers including reduced holding times, giving birds time to feed naturally outside of the transfer timing and individual holding boxes for each bird.  A research report by Withers et al (2019) showed that despite a much-improved success rate for translocation to Cape Sanctuary (Hawke’s Bay) with 92% surviving to release.  However, they had a poorer post release survival with only 22% remaining in the reserve by the next breeding season - which may have been due to dispersal or death.

This is a concern in that small surviving populations may not be genetically diverse and require further top-up translocations.  For this reason, we are keeping a close eye on our new residents and hoping that the diverse, mature forest and limited dispersal routes for titipounamu at Maungatautari will give the birds a chance to establish successfully.  As part of our monitoring we will be conducting pre- and post-breeding surveys and we are currently negotiating for a summer research intern to conduct more detailed work into their survival, dispersal and breeding.  The pre-breeding survey was delayed due to Covid19 restrictions but is about to start imminently.  We look forward to sharing the results in due course and have our fingers crossed that the titipounamu are thriving in their new home.