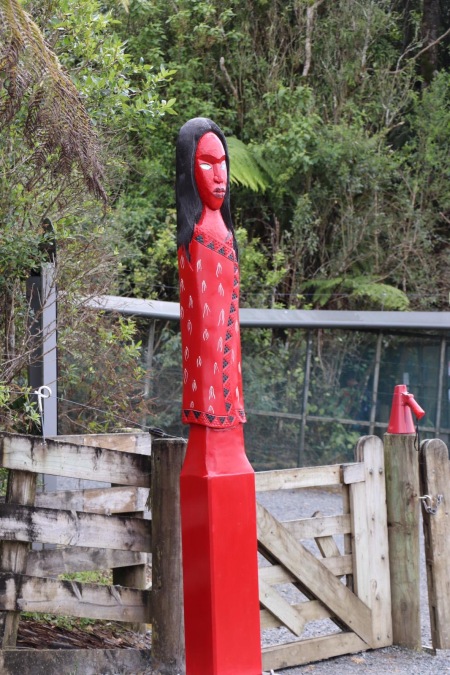 Nganeko’s Pou is a memorial to Nganeko Tawhai, who was the sole owner of Maungatautari 4GIV block in the 1800s. She was the wife of Mahuta Potatau Tawhiao, third king of the Waikato-Tainui iwi.

This block formed the gateway to Maungatautari Mountain for the famed seasonal bird harvesting expectations by Maori from Waahi Pa (Huntly). The birds were highly sought after as a food source and for cloak making. The kereru was always thirsty after feeding on miro berries. Maori set up water troughs in the treetops and birds were caught by flax snares placed over the troughs. The birds were treated and preserved in situ and distributed to related marae settlements at Kawhia, Pirongia, Whatawhata and Waahi.

The bird harvesting teams comprised of three teams. The first team was the culling and clearing team. Two days later the support team entered, these were mainly women who prepared the fallen birds, the third team was the water transport and maintenance team. Strict protocol was observed throughout to ensure resources were sustained for future harvests. The first bird taken was always offered to Tane (God of the Forests).

Nganeko Tawhai died in 1937. Throughout her life she opposed any sale of this land and bequeathed the estate to her successors for their use in perpetuity. The present family (great, great, grand children of Nganeko) request that the land be used respectfully in the future and preserved for their offspring and that Nganeko’s prophecy and aspirations be honoured. The owners of the 4GIV Block leased the property to Waipa District Council in 2011 as part of the Maungatautari Restoration Plan.

Nganeko’s Pou was unveiled on 16th November 2019 at a ceremony attended by descendants of Nganeko, friends of 4GIV Trust and MEIT staff and volunteers. At the ceremony a three-week-old kiwi (named Tawhaio) was released into the 4GIV block.
The Pou was carved by Renata Te Wiata.