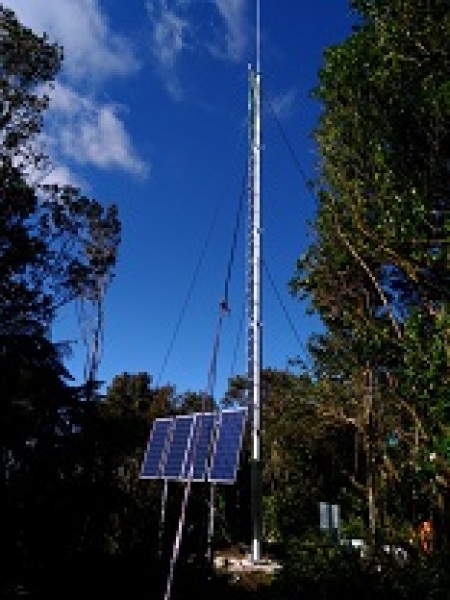 New radio mast to be installed on Maungatautari summit

New radio mast to be installed on Maungatautari summit

Sanctuary Mountain Maungatautari is installing a new radio mast at the mountain’s summit that is set to improve communication and health and safety for its workers and volunteers.

But the job ahead is not like your typical radio mast installation.

To prepare for the installation, volunteers, staff & contractors dug out, mostly by hand through rock, four substantial foundation holes.

Most of the materials for the foundations, including lightning rods and pegs were carried up the mountain by a four-wheeler and on foot, which is a 4km hike through challenging terrain.

In late March a helicopter flew 6.5 cubic metres of concrete up to the summit of the mountain to complete the foundations.  Towards the end of April, the mast itself, which stands almost 18m high and weighs about a tonne, will be airlifted up to the summit by an Iroquois helicopter.

Maungatautari Ecological Island Trust general manager John Simmons said cell phone reception on the mountain is currently patchy and the long-awaited radio mast will provide better digital radio coverage and GPS tracking so staff and volunteers are always accounted for and they know where everyone is on the mountain at any given time.

Project manager for the aerial installation, Craig Laxon, said there is 3,363 hectares of native bush with a 47km fence surrounding it.  Part of his job is to maintain the fences and he often has to go out in the middle of the night in areas without cell phone coverage.

“If needed, and we hope it isn't, it will be a great tool for search and rescue as the radios have a GPS capability,” Laxon explained.

The project was first initiated 15 years ago and is finally being realised with the help of a handful of sponsors and volunteers.

The bulk of project has been funded by Waikato couple David and Jenny Carden who have contributed about $120,000, along with countless hours of their time helping to source the right people, information, materials and resources to complete the job.

“Having been in business we have a lot of contacts to get help from the right people. We’ve spent money but there is a long list of other people who have donated their time and expertise, which is worth a lot of money,” the Cardens said.

The cause was an important one to the Cardens.  They want to see Sanctuary Mountain Maungatautari continue to grow as a tourism venture and a place for people to enjoy.  To do that, workers and volunteers need to be able to work safely and have access to suitable communication on the mountain.

They said people needed to visit the mountain and show their support.

“A feature like a skywalk is just one of the things that would drive more people to visit the mountain.  There’s a huge amount of potential for the mountain in the future but it needs money behind it.  Go and visit and see for yourself how amazing it is,” Mr Carden said.

Anyone interested in donating to Sanctuary Mountain Maungatautari can visit www.sanctuarymountain.co.nz/help_us.