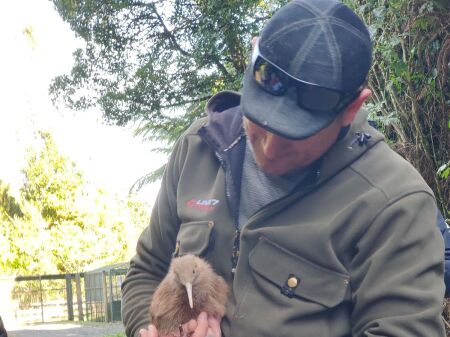 Curious about Kiwi? Summing up the Season

This has been the busiest release season the maunga has ever seen.  A total of 111 kiwi have been released since October 2020 bringing the total kohanga cohort to 239 new founders since October 2018.  Fortunately, my role with the kiwi has become a full-time position with the help from Kiwis for Kiwi and the Jobs for Nature funding they received late last year.  This has enabled me to start monitoring and surveying the kiwi on the main mountain enclosure so that we can get an overview of what the population has been doing since the first kiwi were released there in 2013.

During Easter this year we had two kiwi conservation dogs and their handlers, James McLachlan and Tom Donovan, come in to begin a mark and recapture survey over the course of 30 working days to estimate the current kiwi population on the main mountain.  What we do know is the number of founders on the mountain and that all of those kiwi are marked with a microchip.  The target was to sample up to 60 kiwi and scan them for a microchip, thus giving us a ratio of marked birds versus un-marked birds.  It was a fun 30 days as each day was truly like Christmas!  How many birds will we catch today? How many will be microchipped?  How healthy are they?

I am happy to report that we caught 47 kiwi of which 11 were microchipped.  That gave us a ratio of 1 in 4 birds being a founder, meaning that there has been a lot of successful breeding on the maunga – not surprising given our pristine pest-free environment.  But further to that result is that three out of four birds bred on the maunga cannot be attributed to the kohanga birds as they will only be beginning to breed this coming season.  So, three quarters of the population is the result of the original 77 founders that were released prior to 2018, which is amazing!

We also attached nine adult transmitters to adults so I can begin territory mapping these kiwi. This will be another piece in the jigsaw that will help us work out how the population is tracking by measuring their ‘patch’ of forest.

All of the kiwi were in amazing condition and are some of the chubbiest birds I have ever handled.  If fact the first bird that was captured was the last kiwi I released before the level 4 lock down, so was just over a year old when captured.  It weighed in at 2.215kg which is an incredible growth rate.  The well experienced kiwi handlers Tom and James assumed it was a full grown adult when in fact it was just a young juvenile!

Four of the kiwi found during the survey were some of the early 2013-2015 founders.  Their names were Tongaporutu, Omahina, Ella and Ogo.  I’m sure there are long-time supporters reading this that may have been at their releases.  Omahina weighted in at a hefty 3.340kg!

We will be replicating this survey for the next few years annually to gage the growth rates on the maunga as we expect the growth curve to increase as the kohanga chicks become kohanga breeding adults. 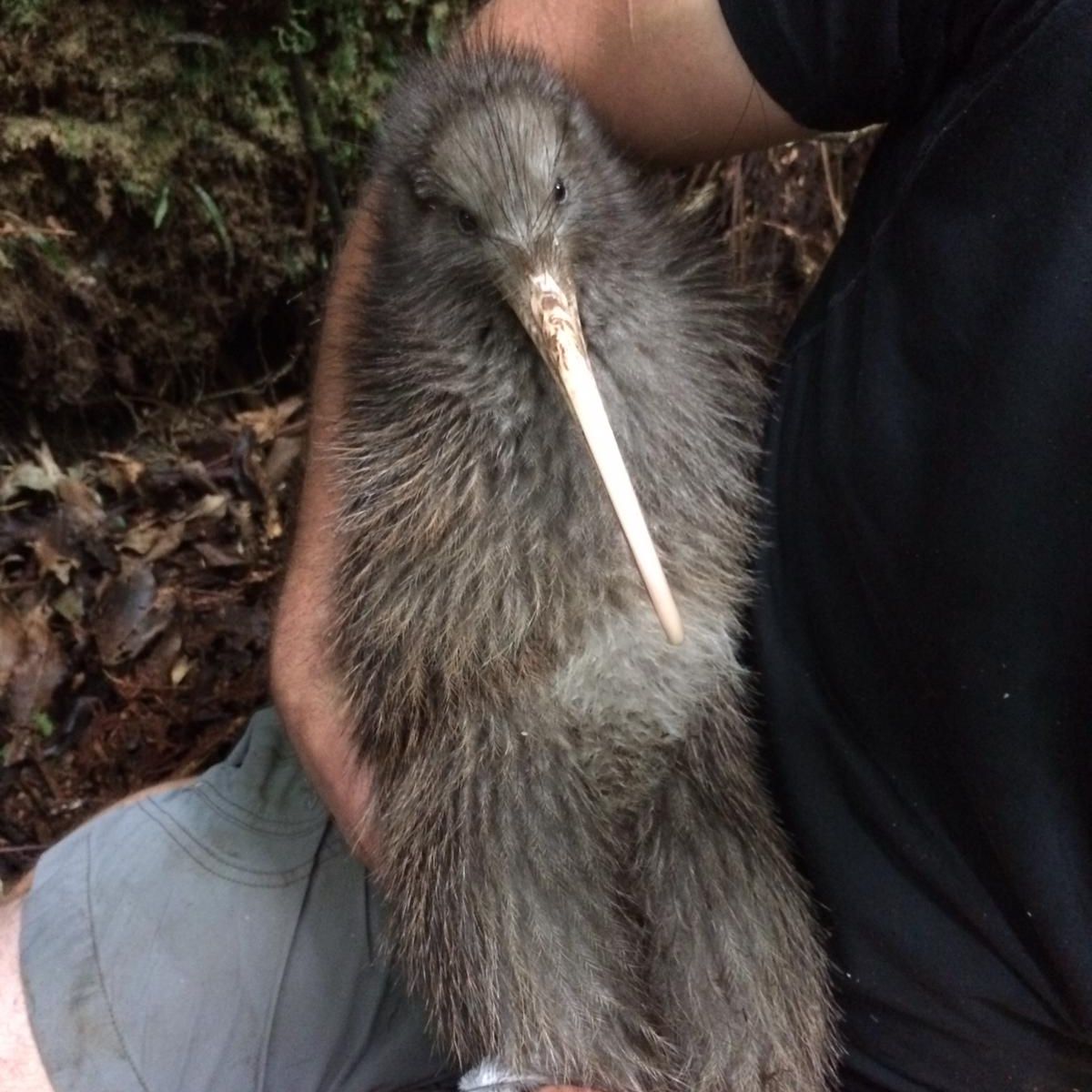 As I mentioned last month, we have just completed our first kiwi call count.  This is an important piece of work that must be carried out annually at the same time of year. The result provides us with a relative abundance measure at designated listening spots.  This year was all about laying the foundation for the future surveys that we will do. What a foundation we got!

The first three nights we experienced dream conditions; light winds, clear skies, breath- taking sunsets (not essential but it adds to the ambiance) and somewhat warm – well, for the time of year.  The fourth night the winds began picking up, so all the noise from moving trees reduced the ability to hear the distant calls thus reducing the records taken in the field.  Then unfortunately on the fifth night, the decision was made to cancel due to an unfavourable storm system traveling across the North Island.

After plugging in all the recorded data from the various teams scattered around the maunga we landed with an average of 16.8 calls per hour!  Each survey site listened for 120 minutes and peaked 60 calls at one site.  And at that site 45 of those calls happened between 7pm and 8pm!  I have a much more detailed report available on request if you wish to have a read.
Another big highlight of the survey was the interactions with the night life that many of the participants had on their walk out including myself.  They ranged from observing kiwi foraging the forest floor, to mated kiwi pairs duetting either side of the track they were walking on and even a pair of males have a territorial scrap, or was it a pair of kiwi mating???? Whatever was going on it lasted for 15 minutes!

I must thank all my volunteers once again who helped me pull this survey off!  There is no way we could have achieved this success without you giving up your evenings for us. 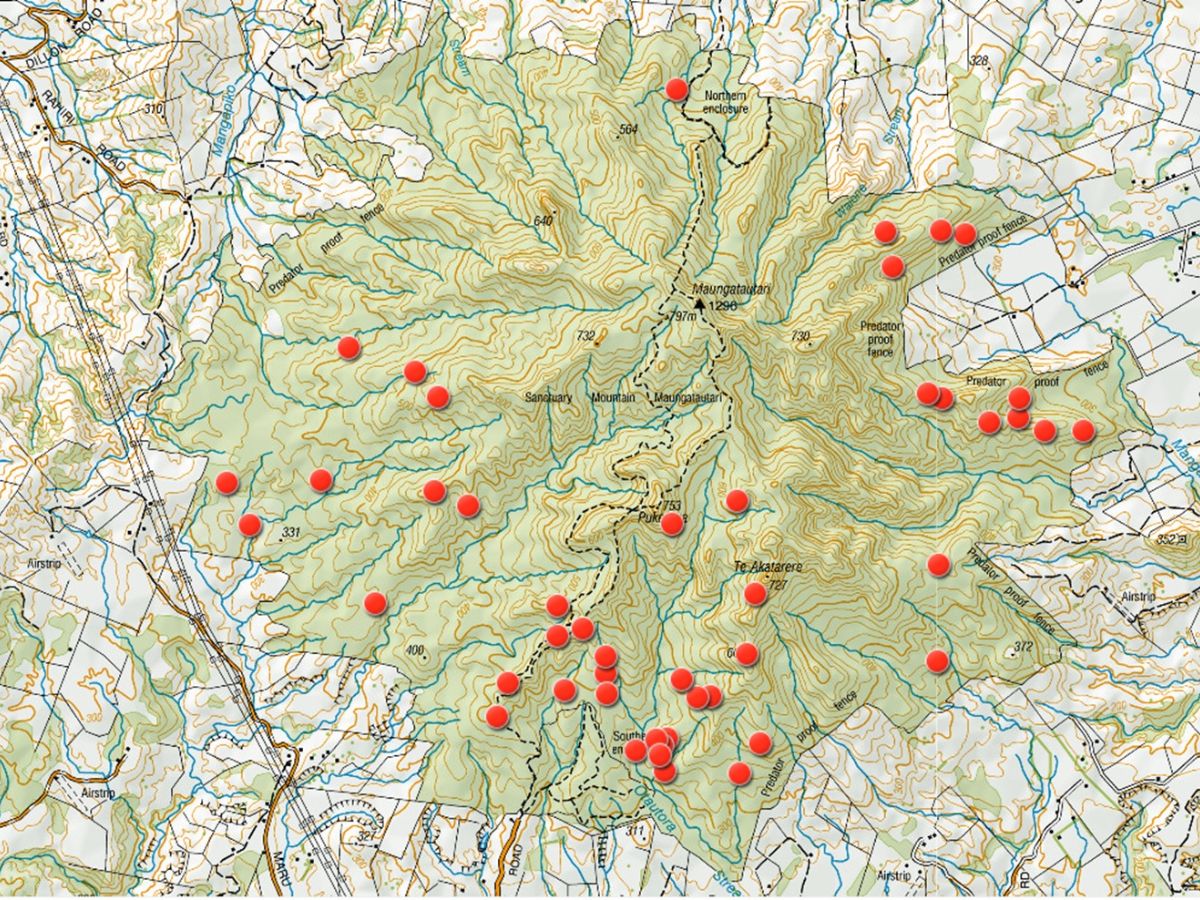 We are now over the halfway mark of the kiwi releases planned to take place over 5 years.  Now the main focus has switched from the kiwi introductions to deciding what methods we will use to capture the kiwi that are destined to bolster new populations and also help create new kiwi populations across the western taxonomic region.  One idea we have been playing with is to capture non-territorial adults on the fence line.  As kiwi mature, they will naturally want to find habitat that doesn’t have a lot of kiwi, and naturally there is plenty of free habitat outside the fence.  The theory is that these kiwi head towards the silent farm land and walk into our 47 kilometre long fence then walk along the inside trying to find a hole to get out.  Prior to the breeding season I have noticed this in many places around the sanctuary where these trails (not unlike the trails sheep make when they walk across farmland) form indicating a kiwi or many kiwi trying to escape.  It makes sense to capture these kiwi rather than chancing across a random kiwi within the sanctuary that would have the potential to break up some productive marriages.

To begin this analysis of the fence line kiwi we will be soon installing remote microchip readers on the fence line to gather data on who is on the fence, be it founders or wild breed birds.  The readers will be partnered with a trail camera so that we can see how many individuals are in fact in an area.  This monitoring will also go towards finding the hot spots where the kiwi densities are higher than others so that we can reduce them at capture time.  The plan is to begin translocations at below carrying capacity so that we can keep the population as productive as it can be so we can maximise the reintroductions back into the wild sustainably.

The plan is to be removing 100-200 kiwi per year!
So, as you can see there is plenty of kiwi related stuff happening here at the maunga!